Australia : Australia, officially the Commonwealth of Australia, is a sovereign country comprising the mainland of the Australian continent, the island of Tasmania, and numerous smaller islands. It is the largest country in Oceania and the world's sixth-largest country by total area.

Sydney, the capital state of New South Wales and the most populous city in Australia and Oceania. Located on Australia's east coast, the metropolis surrounds the world's largest natural harbour and sprawls about 70 km (43.5 mi) on its periphery towards the Blue Mountains to the west, Hawkesbury to the north and Macarthur to the south.

Despite being one of the most expensive cities in the world, the 2014 Mercer Quality of Living Survey ranks Sydney tenth in the world in terms of quality of living, making it one of the most liveable cities.  It is classified as an Alpha World City by Globalization and World Cities Research Network, indicating its influence in the region and throughout the world. Ranked eleventh in the world for economic opportunity, Sydney has an advanced market economy with strengths in finance, manufacturing, and tourism. There is a significant concentration of foreign banks and multinational corporations in Sydney and the city is promoted as one of Asia Pacific's leading financial hubs.

In addition to hosting events such as the 2000 Olympics, Sydney is amongst the top fifteen most-visited cities in the world, with millions of tourists coming each year to see the city's landmarks. Its natural features include Sydney Harbour, The Royal National Park, and the Royal Botanic Garden. Man-made attractions such as Sydney Tower, the Sydney Harbour Bridge, and the Sydney Opera House, are also well known to international visitors. Kingsford-Smith Airport is the main airport serving the metropolitan area, one of the world's oldest continually operating airports. The Central station is the main hub of the city's rail network.

Sydney Opera House: The Sydney Opera House is a multi-venue performing arts centre at Sydney Harbour in Sydney, New South Wales, Australia. It is one of the 20th century's most famous and distinctive buildings.

Bondi Beach: The sweeping white-sand crescent of Bondi is one of Australia’s most iconic beaches. Reliable waves draw surfers while, nearby, hardy locals swim in the Icebergs ocean pool year-round. Trendy, health-conscious Sydney siders head to laid-back cafes around Hall Street, while hip backpackers frequent the area's casual pubs. Walkers and joggers use the clifftop Bondi to Coogee Coastal Walk, with its dramatic scenery.

Daintree National Park: The Daintree rainforest is a national park in Far North Queensland, Australia, 1,757 km northwest of Brisbane and 100 km northwest of Cairns. It was founded in 1981 and is part of the Wet Tropics of Queensland. In 1988 it became a World Heritage Site.

Great Ocean Road:  The Great Ocean Road is an Australian National Heritage listed 243-kilometre stretch of road along the south-eastern coast of Australia between the Victorian cities of Torquay and Allansford. 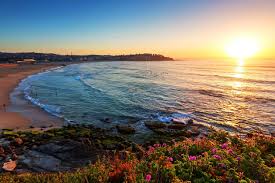 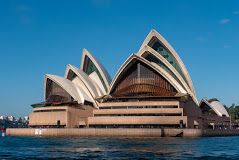 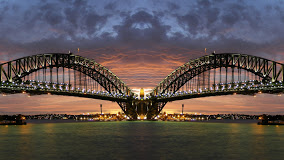